Hostile has been described by Time Out as a “raw, unshowy doc exposes that myth to show that the only crime these people have committed is the mere act of existence” 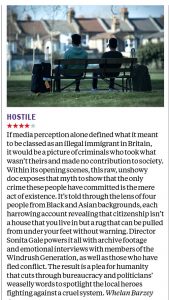 Beginning on the 21st of January at Finsbury Park Picturehouse, Hostile starts a nationwide tour of screenings and Q&As with Picturehouse alongside independent cinemas.

You can buy tickets for our upcoming screening and Q&A tour:
www.hostiledocumentary.com/tickets

You can view our trailer here:
bit.ly/hostiledoc-trailer